The Most Beautiful Mosques in Kuala Lumpur 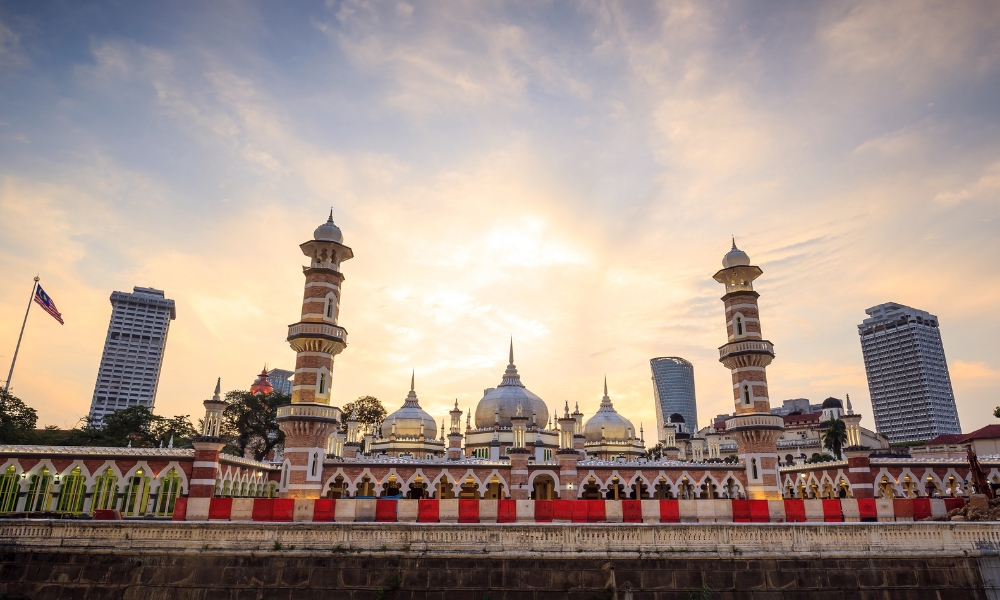 The Most Beautiful Mosques in Kuala Lumpur

Kuala Lumpur is one of the most popular destinations for Muslim holidaymakers from across the world. The country prides itself on its rich Muslim culture and history which manifests itself in the amazing architecture of mosques and other important buildings. Malaysia has a good mix of various ethnicities and denominations that makes up its population. Islam, however, stays the predominant religion in the country.

Your exploration of some amazing mosques in the city of Kuala Lumpur should start with Masjid Negara located near the old part of the city with a number of important historical buildings.

Masjid Negara architecture borrows shades of blue from the Blue Mosque in Turkey. The architectural design patterns reflect the core Muslim beliefs of unity, meditation, modesty, and Ikhlas (sincerity). The use of architectural motifs captures the essence of Muslim belief and social concepts that govern the life of Malaysian society. These include balance and harmony. The use of calligraphy and quranic scripts reflects the power of words in disseminating knowledge and ideas.

The central dome is designed like a half-open umbrella, representing loyalty as reflected in the royal umbrella. Various elements of designs borrowed from Muslim architecture in the middle east can be seen in the interior decoration and layout of the mosque

Masjid Negara is a must visit location for lovers of Islamic architecture. A beautiful Museum of Islam Art located next to the Mosque contain an enormous collection of artifacts from Islamic world. Make sure to spare yourself 2-3 hours to explore the entire Museum.

How to reach Masjid Negara in Kuala Lumpur?

The best option is to catch a taxi or Grab from Sentral Station which should cost you around RM15. A casual walk from Merdeka Square, Chinatown, or the Central Market area can take you to Masjid Negara.

ETIQUETTES OF ENTERING THE MOSQUE

The reception staff at the entrance to the mosque will issue you a ticket to enter the mosque. Men are required to wear trousers or long shorts and women are expected to cover their bodies.

Jamek Mosque is another beautiful and unmissiable place to visit by mosque and architecture lovers visiting Kuala Lumpur city. The mosque can be easily accessed from Masjid Jamket LRT. This station also provides easy access to Central Market and Petaling Street. The interesting neighbourhood can be best explored on foot as it lies on the path of heritage trail in the city of Kuala Lumpur.

I first visited this mosque in 2009 and most recently in 2022. The entire neighborhood has undergone a transformation with rework on roads and another touristy area around Masjid Jamek. A number of wall murals can be seen with images capturing the cultural and national history of Malaysia.

Masjid Jamek is the oldest mosque in Kuala Lumpur built at the confluence of two rivers. The local area catered to the Malay Muslim population and hence the mosque was built in 1909 to cater to the needs of the growing Muslim population in the surrounding areas.

The beautiful architecture of the mosque borrows ideas from the Mughal as well as Moorish architecture with a number of domes and a beautiful minaret. The marble-floored wide open verandah offers respite from the summer heat and you can observe a number of worshippers relaxing in between prayers. The mosque definitely offers a cool and calming sanctuary on a hot humid day in Kuala Lumpur.

Other places of interest in the neighbourhood includes the Central Market, Merdeka Square, Galleri KL and Chinatown KL.

Putra Mosque is an amazing piece of architecture located near Putra Lake in Putrajaya. The administrative capital of Malaysia, Putrajaya prides itself in its beautiful architecture. A half-day tour from Kuala Lumpur city is ideal to explore some of the main attractions in Putrajaya.

I have stayed in Putrajaya at Doubletree by Hilton Putrajaya Lakeside which is a beautiful hotel located very close to Putra Mosque.

The beautiful red brick building captures the true colors and shapes of middle-eastern Muslim architecture. The main dome of the structure is adorned with beautiful design in red granite. Useful information on Muslim philosophers, thinkers and notables are captured inside the mosque to educate visitors about the rich history of Islamic thoughts in all aspects of life.

The beautiful building offers plenty of open spaces to pray and meditate. The mosque is open to non-muslim visitors. However, the visitors are expected to cover the bodies with robes which are provided at the entrance of the mosque.

How to reach Putrajaya Mosque?

Easiest way to reach Putrajaya is to catch KLExpress and catch a taxi from the train station. Alternatively book a day tour online with KLOOK. If you plan to travel by yourself, you can book a half-day tour with the local taxi drivers from KL for around RM 200.

A Home Away from Home: Recommended Service Apartments Kuala Lumpur