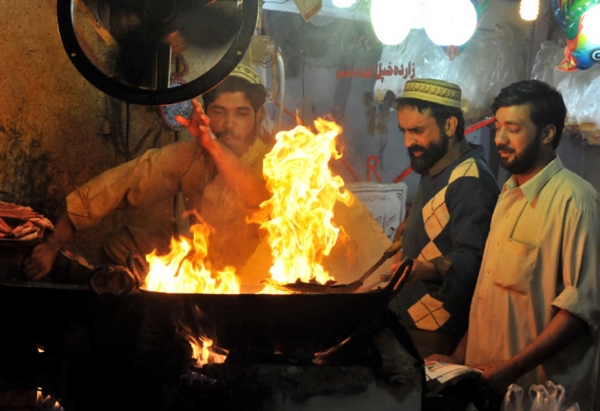 Travelling across northern Pakistan you can explore a wide range of amazing dishes popular amongst natives. Mostly meat dishes are amongst the favourite on the menu in most places up north. People in the northern territory tend to like lamb and beef as compared to Punjab where goat meat and poultry are quite popular. With access to major rivers, some of the areas are popular for a local variety of freshwater fish.

In some remote areas, with an abundance of gamebirds in hunting season, people like pheasants, wild geese and mallards. The number of game birds has declined substantially in the last couple of years which can be attributed to land reclamation, deforestation and overall change in weather.

Travelling on the Silk Road, you cannot miss restaurants specializing in selling Chapli Kebab. The minced kebabs are popularly made with beef and mixed with tomatoes onion and spices. Traditionally the flat kebabs are cooked in beef lard and served with freshly baked bread. One massive kebab with bread can make a decent meal. Chapli Kebabs are popular in Peshawar, Abbottabad and most of the cities up north along the silk road.

“Chicken Karahi” or “Lamb Karahi” is an all-time favourite in the north as most people eating as a group like to eat from the Karahi ( or wok) in which the meat is cooked. “Shanwari” restaurants specialize in serving Karahi made in lamb lard, green chillies and salt. The taste is to die for. This is a must-try dish for food lovers.

However, the northern palette is for more meaty flavours with a minimal amount of spices added to the meat on the skewers. In Peshawar “Namak Mandi” is famous for popular tikka and meat dishes. In Abbottabad “Kalay Khan” (now his son running a restaurant in Missile Chowk) is a must-try for amazing meat dishes, particularly “lamb tikka”

Another popular dish around Attock areas is Katwa. This tender meat in gravy is cooked in large earthen pots and served in clay pots (katwa) with oven-baked bread. This dish is becoming very popular at weddings and other social events.

Peshawar and the tribal areas of Pakistan are popular for another meat dish called “Rosh“. The dish is cooked with tender chunks of lamb meat cooked in salt and oil. This dish is served as breakfast in most Afghan Trucking Restaurants along GT Road and Silk Road. Not a typical uptown restaurant dish, you can find this dish in most of the roadside cafes.

With the arrival of Afghan refugees in Pakistan, Afghan bread has become an essential part of the diet in the northern. The bread has adapted slightly to the local taste and looks a bit whiter and not baked very hard and is red in colour. This is because locals tend to eat the bread when it is hot and do not preserve it for eating later on as consumed in some areas of Afghanistan.

Afghanis have not only brought bread but also Kabali Palau and other local dishes served as a platter in most Afghan restaurants. Afghani Palau is garnished with raisins and sweetened carrots and served with chunks of beef or chicken. The taste is quite different from Punjabi Yakni Palau which is more spicy than sweet.

A small platter of food is served with beans, lentils and spinach along with Palau and dry apricot sauce plum sauce.

Other popular dishes in the north include “Potato Pakora”. The Potatoe pakoras are marinated with chickpea paste mixed with spices. The Pakoras are served with sauces and chutney (sauce). Pakoras are normally consumed as snacks rather than a meal. Other snacks that are enjoyed around northern areas include “Channa Chat” (chickpea-onion chat).

Dray fruit is available in abundance all through the year as dried apricots, walnuts, almonds, pinenuts and cashew nuts are grown extensively in hilly areas. Most of the fruit is dried and exported to other parts of the country.

Most popular places for a Honeymoon in Malaysia – From Pakistan

ONE OF THE FOLLOWING

Cafes and Casual Dining in Lahore