A bit about Sydney

Sydney is rated as one of the finest cities in the world with beautiful beaches, great restaurants and places to visit. December to February is the busiest tourist season in Australia with millions of visitors from across the world. Australia is quite popular with young holiday visa workers from Europe as there is plenty to work available during summers in cities as well as rural Australia.

Most hotels in the city are located near the CBD, hence plenty of places of interest can be explored on foot. Keep an eye on the weekly event calendar as a number of festivals, concerts and activities are hosted over the weekend that attracts people from all age groups. With a diverse population from across the world, the city is a home to amazing restaurants, cafes and bars. Here is some useful information if you are visiting Sydney for the first time.

Sydney city offers a great network of buses and train that connects all major regions of the Cosmopolitan area. The train network is extended to Blue mountain in the west and Hornsby towards the North. Some areas like Northern Beaches and South-East like Randwick, Coogee and Little Bay are not accessible by trains and can be reached by buses.

Opal Card works both on buses and trains as well as light rail that connects CBD with Star Casino and inner west. If you are planning to spend a couple of days in Sydney and use public transport, it is advisable to buy Opal Card.

Taxis and ridesharing services ( Uber, Ola & Taxify) operate in all areas of Sydney. Therefore, it is a good idea to install 13Cabs App for taxis and Uber App for using UberX service in the city.

Using Uber is an efficient and economical way to commute in the city. Commuter NSW and Opal Travel are some useful Apps that can provide useful information on train and bus timings as well as various routes.

Where to stay in Sydney

If you have a couple of days to explore, the best option is to book a hotel in one of these neighbourhoods in the city.

These hotels are closer to CBD and Circular Quay. Places of interest in the neighbourhood include Harbour Bridge, Opera House, Botanical Gardens, Museums, Darling Harbour & number of world-class restaurants.

This area is close to China Town and Surrey Hills. There is a number of budget hotels available in this area including:

Alternatively, you can book serviced apartments in Sydney. Fraser Suites, Meriton Apartments and Adina Apartments are the most popular chains operating in the city.

What are some of the best areas to Stay in Sydney?

Sydney has a number of suburbs with distinct architecture and demographics. The most exclusive area lies east of Kings Cross and including Double Bay, Rose Bay and Vaucluse.

Popular seaside locations include Bondi, Coogee and Manly (northern beaches). Manly is easily accessible by ferry from Circular Quay in the city.

What are the best places to stay for backpackers?

Some nice budget backpacker hostels are located around the central station on Pitt Street. Most popular of these include Wake-up Sydney, Sydney Backpackers and Westend Backpackers. There are a number of nice cheap cafes & restaurants in the neighbourhood. 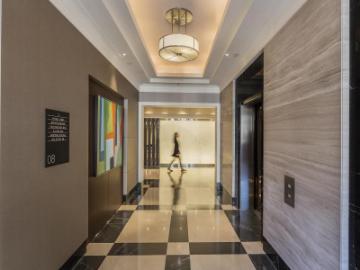 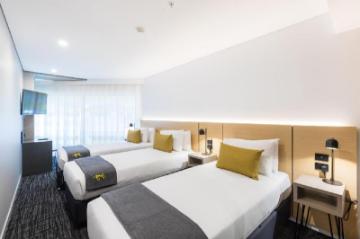 Darling Harbour is the centre of attraction for visitors to Sydney because of its central location for restaurants, bars, cruise tours, aquarium and nightclubs. Checkout Sydney event guide for events scheduled over weekends close to Christmas.

Eat are more than 50 restaurants and explore trendy bars on Barangaroo Boulevard. Other places of interest include Star Casino which is walking distance from the Harbour. International convention center is a new addition to this area.

Circular Quay is adjacent to Opera House with a number of world-class restaurants and waterfront Hotels. Museum of Modern Art is located next to Overseas Passenger Terminal where cruise liners dock all throughout the year.

Cruiseliners brings plenty of activity to the area which is the heart of tourist activity. Mercantile Hotel, Lord Nelson, Union Hote and Australian are popular watering holes for locals and tourist alike. The Rocks is the historical quarter of the city with plenty of heritage building.

Take a free guided tour on the weekend to explore the neighbourhood. Weekend markets are held at the end of George Street. Mrs Macquarie Chair, Botanical Garden and Museums are walking distance from Circular Quary.

Sydney has an amazing mix of the population from over 80 countries of the world.  Being close to South East Asia there is a strong Asian influence on cuisine, with Vietnamese and Thai Food becoming a staple food for most. Different suburbs of Sydney has a varied concentration of ethnicities. Therefore, exploring various suburbs for food is a great way to get to know the city very well. Some great places to explore close to the city include Newtown with over 100 restaurants, bars and clubs. This funky place is a 10$ cab ride away from CBD and is a must visit for Food Lovers. There are a number of nice restaurants in Glebe Point Road (Glebe), Darlinghurst (modern/trendy fusion food), Surrey Hills (for trendy uptown restaurants/bars)

Sydney city has hundreds of kilometres of walking and bicycle tracks connecting various parts of the city. The best way to enjoy the city is to choose a walking track around Darling Harbour and Circular Quay to explore the beautiful architecture of the city.

Some enjoyable and easy walks include walking across the harbour bridge starting from the Rocks that takes you over the bridge to Milsons Point and McMahons Point. This track continues on for another 15km to Manly, passing through Mosman and Balmoral Beach. You can enjoy beautiful coastline and some great views of the city.

Other more popular walks take you from Bondi Beach to Coogee Beach. This is a very popular walk with most tourist and you will get to explore Bronte, Tamarama and Clovelly beaches along the way. The walk continues on the Maroubra, Little Bay and all the way to Cronulla, passing through famous Botany Bay. This track is more popular with the cyclist as the entire distance is more than 35km.

Another interesting area to explore is Manly, that can be reached by ferry from Circular Quay. Manly is popular for a number of great restaurants, nice beachfront and great crowds of European Backpackers who prefer to live in this area during Summers.

National Parks around Sydney has a number of great bushwalking tracks. The exact information can be obtained by download NSW Parks app which provides comprehensive maps of the trails and other useful information. Some popular tracks include

For more adventours experience Blue Mountain National Park and Kurangai National Parks are must ares to explore for number of scenic walking tracks.

The Blue Mountains is one of the most visited destinations around Sydney. Located a distance fo 80km from the city, Blue mountains covers six nationals Parks. Because of its beauty and natural history, Blue Mountains is placed on worlds Heritage List. The blue gum trees when burned gives out a blue smoke that is suspended over the top of the valley give a bluish colour when viewed from western suburbs in Sydney. The area is part of the sandstone plateau carved by wind and water for millions of years. Some of the cave formation in Jenolan Caves are more than a million years old.

For the most tourist, the centre of attraction is the historic site of Three sisters located in Katoomba. Other interesting activities include Scenic World in Katoomba offering worlds steepest incline that takes you to the bottom of Megalong Valley. Katoomba can be easily reached from Sydney Central Station by catching a train to Katoomba. An alternative option is to book a day tour that takes you around the scenic locations around Wentworth falls, Katoomba and Leura. This location can also be covered by booking hop on and hop off the bus at Katoomba Station. Most tours include a visit to Scenic World and local tour as part of the package. Booking a day tour is the best option to explore the area if you plan not to drive.

Our favourite places in Katoomba includes Paragon cafe for its nice tea and scones, Harrington hotel for a nice shake and wedges while enjoying the beautiful decor dating back to 1880s. Katoomba has a number of art galleries and antique shops. The area attracts a large number of artists and writers who seek inspiration from serene valleys and relaxed lifestyle of the mountains.

Hop on and Hop off Bus

Indulge in some Amazing Experiences in Sydney

Any questions about Sydney. Ask our team.